When Will We Run out of Dental Metals to Recycle? 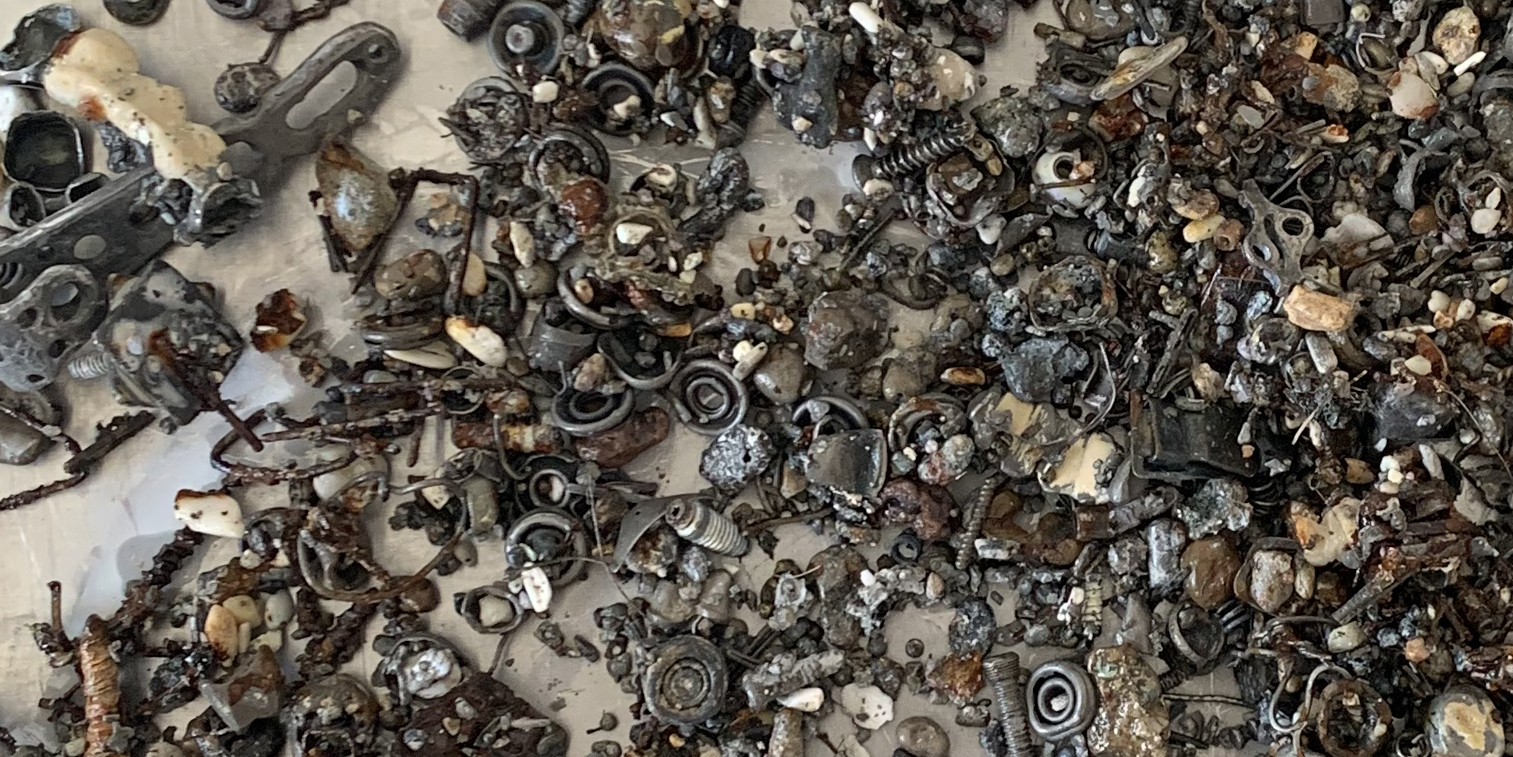 Alexandra is a certified Celebrant and the Content Manager at Parting Stone where she creates forward-thinking content for funeral professionals. Alexandra is passionately death curious, and co-hosts the Deathcare Decoded podcast. Learn more about Parting Stone and their complete alternative to cremated remains here.

When Will We Run out of Dental Metals to Recycle?

A strange, but lucrative, aspect of the death profession is the recycling of medical and dental metals that are removed from the body during and after cremation. Many of the metals that are used in medical and dental implants fetch top dollar from metal recycling companies, as dental implants contain silver, gold, palladium and other valuable metals. In fact, the scrap metal refinery Core Scientific claims that dental group practices can make up to $10,000 annually by recycling, and funeral homes currently stand to make much more than that based on individual home call volume and cremation rates. Our rough estimate puts the total possible cremation metal recycling opportunity for the funeral profession at $80 million annually in the United States (or 1.6 million cremations per year, at around $50 on average per cremation).

However, in recent decades there have been rising health concerns over the use of mercury in metal amalgam dental fillings which also used gold and other precious metals, and many dental practices have switched to resin or porcelain filling alternatives for these dental work procedures. Because of this, the US has seen huge drops in the use of metal amalgam fillings since the 1970s. We wondered if and when the funeral profession could run out of valuable dental metals to recycle, and what monetary impact that could have on our businesses.

Is the use of Dental Metals Really Declining?

According to this study titled Dental Amalgam Prevalence and Alternatives, “The use of dental amalgam in the U.S. is declining according to the U.S. Public Health Service (USPHS) and the American Dental Association (ADA). In 1990 amalgam was used in slightly fewer than half of all dental restorations. This represented a 38% decline in its use over the previous decade. USPHS expected the decline to continue, and it confirmed this trend in a 1997 report. The ADA estimates that approximately 30% to 35% of fillings placed today are amalgam. It believes amalgam use drops about three to five percent each year […] A 1993 USPHS report stated that dental amalgam accounted for 96 million, or just under 50%, of the 200 million restorative procedures U.S. dentists conducted in 1990. This represented a 38% reduction in amalgam use since 1979. USPHS predicted this trend would continue.”

That report came out in 2005 and is one of the only studies with real data available to the general public that makes a projection about declining uses of dental amalgam in the dental profession. However, today it is 2021, and we know that metal amalgam fillings have not been eliminated completely, though they are much less popular than resin and porcelain options, which have been steadily growing in popularity since the 1990’s. Furthermore, precious metals are still used in crowns and other dental work besides fillings.

There are also a huge number of baby boomers, gen x-ers, and millennials alive today who grew up with metal amalgam fillings as the norm. (At 33, I still have two metal fillings myself!) Even though life expectancy is shockingly decreasing amongst gen x, and millennial generations, the youngest of those three generations are not projected to die out in large numbers until the 2070s and 2080s at the very earliest. Thus, the question then is not, “when will we run out of dental metals?”, but “will we stop seeing an amount of dental metals in our embalming rooms and crematories that is no longer dependably profitable?”

To learn more about the specific details of dental recycling in the funeral industry, we consulted Kevin McKay, Manager of Cremation at the company Cremation Recycling, (a division of Midstates Recycling). Kevin had some helpful insights as to how many dental metals are recycled from crematories across the country each year, which metals are most valuable, and the impact that this practice has on the bottom line of funeral businesses.

According to Kevin, the most valuable metals being recycled from crematories today are gold, silver, and palladium. Those metals are typically from dental implants and are recycled along with non-precious metals like nickel, cobalt, stainless steel, and chrome from medical implants like joint replacements, even though the smaller dental implant metals are definitely where the money is when it comes to value. Today’s price for Nickel per pound is $0.20, whereas the price for gold is $1756 per ounce today. The average dental crown can consist of as much as 55% gold, which means that a 2.5 gram crown could be worth about $65 before refining costs, according to Kevin McKay. Crematories and funeral homes recycle all collected metals together, then the recycling refineries like Cremation Recycling separate out the different metal types, and calculate the individual values by weight.

According to Kevin, precious metals like gold are durable, popular, and used in more dental implants than just amalgam fillings, so worrying about seeing these precious metals disappear from crematories isn’t actually much of an issue “If the dental field stopped using precious metal tomorrow, we would still be seeing these metals in our crematories in 40 years. It’s tough to quantify how much time is left, but if we started the clock today, if someone who is 30 and has dental metals that are never replaced, lives to be 80, that’s dental metals being collected in 50 years. But that hypothetical is not actually happening… Gold and palladium are used in crowns [not just the fillings that are being replaced with porcelain and resin] so every year it goes on and precious metals and gold continue to be used in dental work, which means one more year we’ll see them in our crematories. And they are even coming back into popularity more and more these days.”

In addition, Kevin revealed that, although the precious metals from dental implants stand to be a huge source of revenue for crematories and funeral homes, many funeral businesses opt to have the Cremation Recycling company send the proceeds directly to a charity, for both humanitarian and tax reasons. Kevin explains: “No crematory is having their bottom line impacted by this. At least not publicly. If we have a crematory that does 2000 cremations annually, they are generating an average of $50 per cremation from metal recycling. It all depends on the demographics of the families that they serve, but on average, at 2000 cremations a year, that’s about $100,000 per year from recycling metals alone. But these are just averages. Some crematories make more, some less, it depends. A large number of funeral homes and the funeral company conglomerates that we work with donate all of this money to charity. They don’t take a penny… They have us cut checks directly to charities so they can save on the tax implications. Funeral homes also don’t want to be perceived as grave robbers, so they give the money away. Legally, according to CFR-40, funeral homes and crematories are required to correctly dispose of metals that come out of the retort, which means recycling, which means lots of spare income, but if they donate that extra money they can square it as a charitable donation and no one is going to argue with that. IF they can’t prove where they donated, they usually say that they apply that money to the upkeep of equipment etc. But ultimately recycling is just a great bonus, it is a great surplus. If a crematory is doing 2000 cremations a year that means that their sales figures are probably in the millions, so $100,000 is a bonus, not a make or break income source.”

No funeral home wants to come across as greedy or appear to be profiting from a family’s deceased loved one, so most businesses agree that dental recycling is an excellent opportunity to give back to their local community, or a greater cause. And, even though the value of these metals seems huge at first, most of the income, if not given away, is put towards equipment repair and upkeep, and doesn’t make up a huge portion of a funeral business’ income.

Will Transhumanism Impact the Future of Cremation Metal Recycling?

It is a very distant question of whether all dental implants will ever stop using precious metals. However, when imagining the possibilities of what the future of dental and medical implants looks like in the next century, there is no telling what advances in medicine and technology hold. In the case that one far off day all dental implants become resin or another material, one direction to look in for recyclable metals is the concept of transhumanism. Transhumanism is “a philosophical movement, the proponents of which advocate and predict the enhancement of the human condition by developing and making widely available sophisticated technologies able to greatly enhance longevity, mood and cognitive abilities.” Transhumanism technologies include biomechanics, bio-implants like Elon Musk’s Neuralink, virtual reality, digital consciousness uploads, nanotechnology, and more. According to this blog, technologies like cybernetics, nanotechnology, and intelligence-enhancing implants would produce metals integrated with the body that would need extraction and removal post-mortem.

Learn more about Transhumanism and the Future of Deathcare in this episode of the Deathcare Decoded podcast with deathcare educator, licensed funeral director, and sacred grief practitioner, Joél Simone Anthony: *DD Banner*

While transhumanist ideas and technologies like bionics or nano-technology being integrated into or with the body in order to increase life span and life quality are still quite a few years off, technology like joint replacements are a real first step in the transhumanist direction. According to this article from the Philadelphia Inquirer about recycling medical metals from the deceased, “People are living longer and medicine is advancing, so it’s becoming common for people to die with artificial joints. In 2009, nearly 400,000 people in the United States received hip replacements, according to the American Academy of Orthopaedic Surgeons. More than 600,000 people got knee replacements.” While the metals used in larger joint replacements are absolutely less valuable than the precious metals in dental implants (titanium alloy is only worth $12 a pound according to this article from the Philadelphia Inquirer, compared to gold at $1,756 per ounce), at the rate that other biotechnologies that could use various types of metal are beginning to become available, they present a possible alternative or addition to dental metal recycling income over the course of the next century.

In Conclusion, We Can Relax

Though metal amalgam fillings are declining in popularity, gold and other precious metals are still commonly used in crowns, and according to the experts, will continue to be used in those types of dental implants for years to come. The question of whether there will be no more dental metals to recycle is probably not one that our, or even the next, generation of funeral professionals will need to worry about. It’s possible that the metals lost from dental amalgam fillings could be replaced with metals from extracted nano-technology, or enhanced bio-mechanics in the distant future, but as of today, dental implants like crowns still use enough gold and precious metals for our businesses to recycle at huge values.

Our profession should enjoy the financial padding that dental metals recycling will continue to offer, whether that income is received by our own businesses or put to charitable use. And, according to the experts, we can rest assured that we’ll be recycling precious metals from dental implants and more for many years to come.