Preparing for the Secular Revolution in Funeral Care 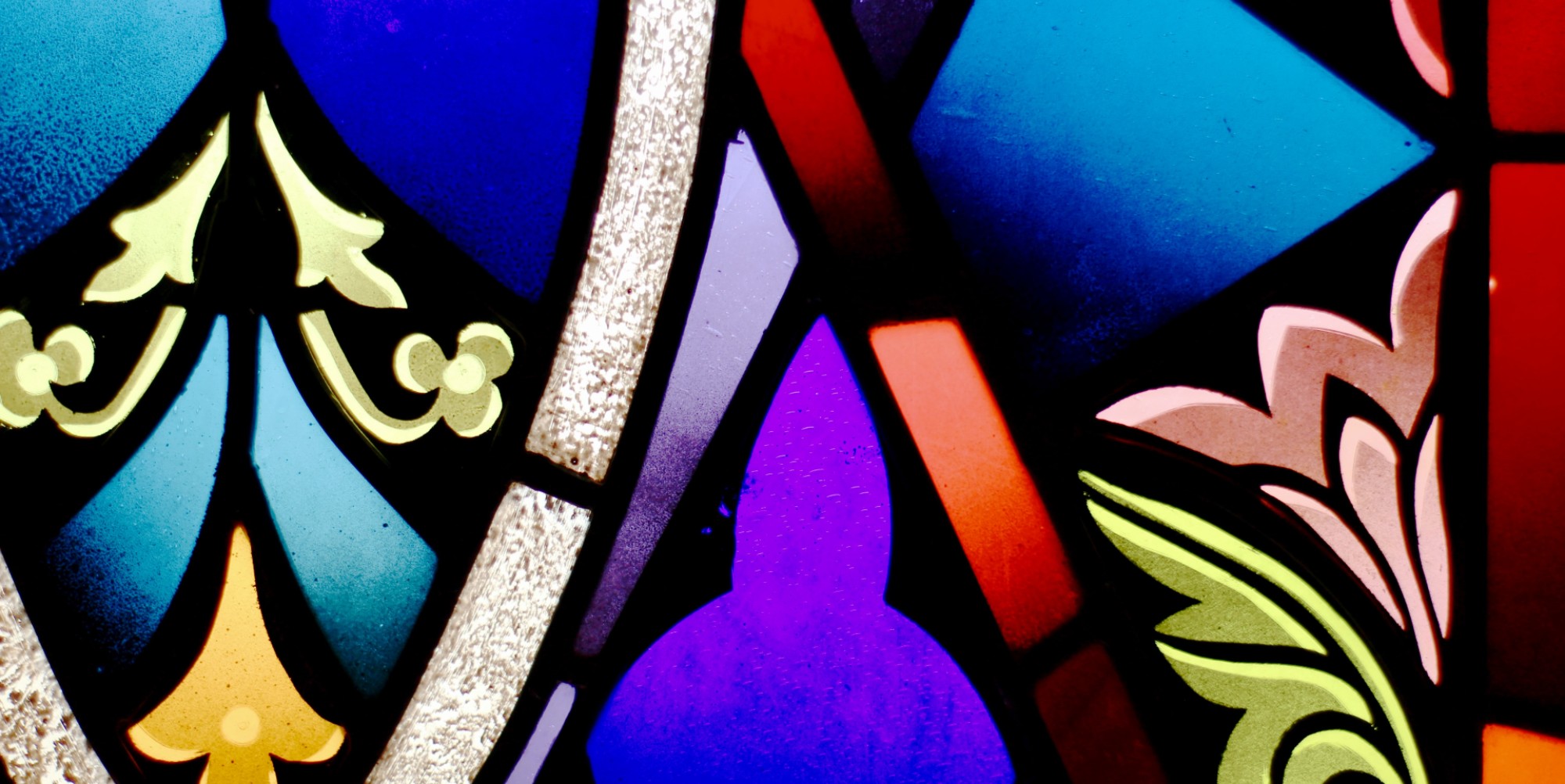 Alexandra is the Culture and Content Manager at Parting Stone where she cultivates a positive company culture for a fast-growing team of first-gen death care professionals. Alexandra is passionately death curious, and co-hosts the Deathcare Decoded podcast. Learn more about Parting Stone and their complete alternative to cremated remains here.

Preparing for the Secular Revolution in Funeral Care

More than many other professions, funeral care is closely tied to religious traditions and practices. Those traditions impact the work that we do and the businesses that we run. Understanding the beliefs and traditions of the families that you serve is an important aspect of offering funeral planning that is meaningful and healing for those families. However, studies show that today’s population has been steadily trending less and less religious over the past decade, especially the millennial and gen z generations. This raises the question of how prepared our profession is to offer meaningful services to families and individuals who are secular, or without strong religious preferences. Funeral businesses should be proactive in learning about and preparing for the secular revolution that’s coming to funeral care.

Data on Rising Secularism in America

According to the Pew Research Center: the religiously unaffiliated share of the population, consisting of people who describe their religious identity as atheist, agnostic, or “nothing in particular,” now stands at 26%, up from 17% in 2009. Both Protestantism and Catholicism are experiencing losses of population share. Currently, 43% of U.S. adults identify with Protestantism, down from 51% in 2009. One and one-in-five adults (20%) are Catholic, down from 23% in 2009. Meanwhile, all subsets of the religiously unaffiliated population – a group also known as religious “nones” – have seen their numbers swell. Self-described atheists now account for 4% of U.S. adults, up modestly but significantly from 2% in 2009; agnostics make up 5% of U.S. adults, up from 3% a decade ago; and 17% of Americans now describe their religion as “nothing in particular,” up from 12% in 2009. Members of non-Christian religions also have grown modestly as a share of the adult population.

Research also shows that younger generations, particularly millennials and gen z, are more secular and less religious than ever before. Another article from the Pew Research Center outlines that “while the U.S. public, in general, is becoming less religious, the nation’s youngest adults are by many measures much less religious than everyone else. Indeed, one of the most striking findings in the recently released Religious Landscape Study is that Millennials (young adults born between 1981 and 1996) are much less likely than older Americans to pray or attend church regularly or to consider religion an important part of their lives.” 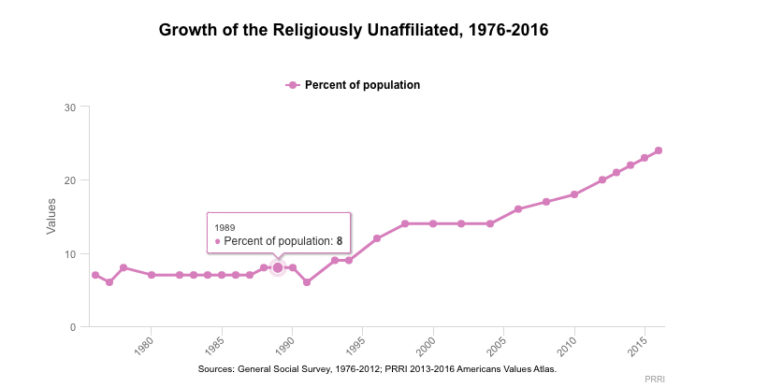 Data from one study on the Religion in Public blog actually made projections about when non-religious or secular will be the largest group in America, by religion. The data from that study accounts for some variables and margins of error, but states that, if secularism, or “none” in religious preferences, grows at its slowest projected rate, and Catholicism (one of the larger religious populations in the US) grows at its highest projected rate, non-religious/secular/none will still be the largest religious group in America by 2029:

Really the most important thing I was looking for was when the lower bound for the religiously unaffiliated was higher than the upper bound for any other religious group. Or put more directly: when does the model say that the “none’s” are going to be the largest religious group in America? That answer is in 2029. This is the year that if none’s grow at the lowest path projected and Catholics grew at the highest path, the religiously unaffiliated would still be larger. The nones are estimated to be 27.1% of Americans in a decade. If the question is when they will be the largest group, irrespective of margin of error the answer is 2023 at 24.1%.

If we use the Pew Research Center data stating that 26% of today’s population is none/non-religious/secular, the estimated increase to 27.1% in 2030, or a 1.1% increase, combined with the projected decrease in all other religious growth, is all it will take to make secularism the dominant religious preference in the United States.

A Closer Look at Secular Numbers in Funeral Care

If, according to the research stated above, 26% of today’s population is less religious, we can take a look at what that would mean for the total number of death planners in the US last year.

Furthermore, we know that CANA’s projections have cremation numbers steadily on the rise already, Christianity numbers are consistently falling among younger generations, and cremation is not often associated with Christian burial practices (obviously with some exceptions). All of this data points to and supports an increased number of cremations over the next few decades.

Additionally, looking at life expectancy for gen x (b.1965-1980), millennials (b.1981-1996), and gen z (b.1997-2021), which is shockingly projected to be shorter than that of the baby boomer generation, and the data that points to younger generations being increasingly less religious overall, it’s safe to say that preparing for secular funeral care that will serve less religious populations sooner rather than later is in the best interest of the funeral profession and the families that we serve.

Data also shows that there is a correlation between religious beliefs and consumer choices when purchasing deathcare goods. Death planners clearly want memorials, rituals, and options that reflect their own beliefs and values, not a blanket Christian-centric, one-size-fits-all funeral. This article explains how an individual’s religious beliefs, or lack thereof, weigh on the choices they make, specifically about internment location, caskets, and embalming:

When looking at this data, it’s important to understand the difference between spirituality and religion. While younger generations are increasingly secular in their funeral care needs and adhere to religious practices less and less in general, that doesn’t necessarily mean that they are less spiritual, and are not looking for meaningful disposition and death planning options that are more in line with non-traditional belief systems. In fact, many grief counselors and death educators agree that ritual is helpful in the healing process for anyone, regardless of religion. This article from the Center for Loss explains that “rich in history and rife with symbolism, the funeral ceremony helps us acknowledge the reality of the death, gives testimony to the life of the deceased, encourages the expression of grief in a way consistent with the culture’s values […]” Knowing that “non-religious” does not mean void of values or beliefs is the keystone to understanding how to plan for future death planning generations. To learn more about the importance of rituals and grieving, and what secular families are looking for in funeral care today, click below and download our free ebook guide to Contemporary Cremation Rituals:

On a recent episode of Deathcare Decoded, Joél Simone Anthony, death educator, sacred grief practitioner, and licensed funeral director takes a look into deathcare’s future to explain that transhumanism (a philosophical movement, the proponents of which advocate and predict the enhancement of the human condition by developing and making widely available sophisticated technologies able to greatly enhance longevity, mood and cognitive abilities) and technology will also play a role in how future generations experience grief and death:

“I think we also need to prepare ourselves and build our facilities to have more humanistic services as opposed to religious and dogmatic services. With the implementation of technologies that prolong life and blur the lines between death and the human and the spirit, I foresee a lot of religious and dogmatic practices being implemented into deathcare less and less. I observed it during covid last year, and even this year, when people couldn’t have traditional services […] And so technology became a big part of the way that we did deathcare. Religion wasn’t the head anymore. And I see, with this merge [of biology and technology that we are heading for] and these lines being blurred, the same thing happening, but on a deeper level.”

Joél also points out that there is a difference between “religious” and “spiritual” and that as death practitioners it is our job to show up without personal preference or belief in order to serve families with diverse cultures, backgrounds, and religious practices. Though many workers in this profession may adhere to more traditional religious outlooks, it’s important to understand that many of our families are coming from different places. Hear more in this video from Joél’s interview with Deathcare Decoded:

“A lot of the conversation I’ve been having recently has been about approaching grief from a spiritual perspective because I’m a very spiritual person and I see death and grief and the whole mourning process and transition process as very sacred and spiritual. However, as a professional, it is my job to show up as a blank palate. It’s my job to show up and be the blank canvas for commemorating your loved one in the way that either they chose or that you’re choosing. And what I always tell my students about spirituality is, the only thing that is different between spirituality and religion is, instead of [religion] saying ‘this is that They say I have to do to connect with God or nature or spirit or whatever you want to call it, [spirituality] is the individual saying ‘this is how I connect with God, nature, spirit, earth, whatever. It’s very personal, and that’s what we should accommodate, not only in the future but now.”

What Does Secularism Mean for Your Funeral Business Moving Forward?

When we can fully understand and accept the multiplicity and expanse of cultures, beliefs, and customs around death, we will be fully capable of serving future generations of death planners. Understanding that spirituality, religious preferences, or lack thereof, play a role in what services and funeral products each death planner is looking for can help our businesses stay at the forefront of secular funeral care. No matter what religion someone practices or doesn’t, ritual is still an important part of the healing process during grief and mourning, so making sure that your funeral home is prepared to help non-religious families create new rituals around death and loss will ensure that each family you serve has the opportunity for a meaningful memorial or service. We’ve made a guide to contemporary cremation rituals that families of any religious background will love. Click below to download the free ebook and learn more: