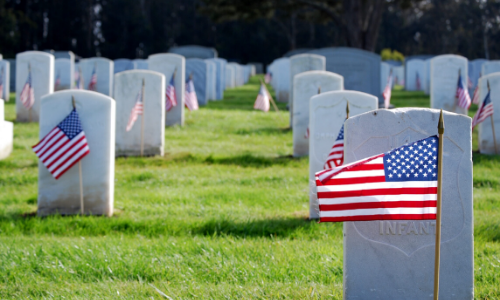 My father, a World War II veteran, is buried in the national military park cemetery on the site of the Civil War Battle of Shiloh, Tennessee. He is one of nearly 4,000 veterans, including 3,584 Civil War soldiers, the park honors each year on Memorial Day. The spectacular, touching Memorial Day service at Shiloh National Cemetery usually includes cannon firing demonstrations, an evening concert, and a touching military tribute within the cemetery grounds.

The long-standing tradition began even before the park was established in 1894, and thus is one of the oldest continuous Memorial Day commemorations in Tennessee. Memorial Day 2020 will break that outstanding record. Due to COVID-19 restrictions, the annual Memorial Day events in the Shiloh National Cemetery have been cancelled — for the first time in nearly 130 years.

Memorial Day group celebrations certainly aren’t the first or only public gatherings to be cancelled or drastically changed by the pandemic. Death care professionals will be the first to attest to that fact. These aren’t cancelled concerts or soccer games. Limiting our ability to honor our dead — especially our veterans — has been particularly heartbreaking.

The National Cemetery Administration (NCA) announced that although the 142 Veterans Administration national cemeteries it oversees will be open for visitation during the holiday weekend, it will not allow public events. Sadly, this includes the groups of volunteers who annually place flags at each veteran’s gravesite. Family members, however, may still place flags and flowers on individual graves. The NCA has asked to observe social distancing guidelines.

Arlington National Cemetery is a popular historic site that typically welcomes more than three million visitors every year. It’s also the final resting place for more than 400,000 veterans. Since March, though, it’s only been open to family pass-holders and cemetery employees. The Department of the Army, which manages Arlington, has also required visiting families to wear face masks since March.

As with death care, veterans cemeteries are shifting to remote channels to connect with families and loved ones of the deceased. The VA has invited people to “participate virtually” in 2020 Memorial Day events.

Arlington and other veterans cemeteries will still hold their traditional Memorial Day wreath-laying ceremonies. This year, though, these will not be open to the public. Instead, cemetery staff will record and photograph the ceremonies for posting to social media.

Additionally, the VA is heavily promoting its Veterans Legacy Memorial (VLM) site, which it launched in 2019. The site features a memorial page for each and every veteran interred in a VA national cemetery. As of May 14, the VLM memorial pages are now open for public comments, memories, and appreciations for the veteran’s service.

The Boy Scouts of America will take part by posting public tributes to the VLM throughout the day. The scouts will also observe the National Moment of Remembrance at 3:00 p.m. EDT from their homes. Scouts in full uniform will salute the flag and “say the name of a fallen service member as they would if placing a flag at the veteran’s grave.”

The National Park Service, which manages 25 national parks and veterans cemeteries (including Shiloh), is also embracing virtual memorials. On Monday, May 25, the service will stream a day-long “Virtual Memorial Day” commemoration to honor all veterans. From 8:00 a.m. to 9:00 p.m. EDT various parks will contribute live content ranging from poem readings to a recital of The Gettysburg Address. Viewers can join through the Vicksburg Military Park Facebook page.