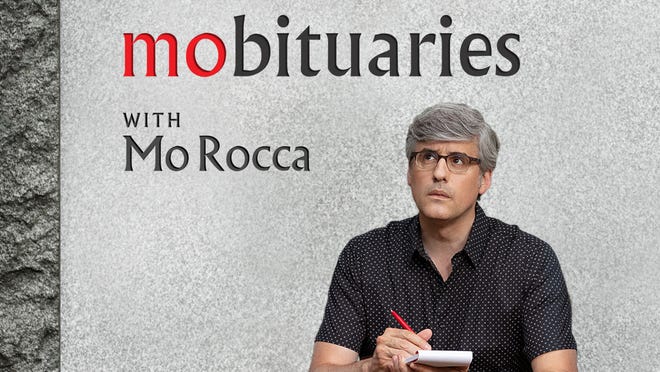 What do Neanderthals, Thomas Paine, and Chuck Cunningham of Happy Days have in common? They’re all dead — and, in writer and humorist Mo Rocca’s opinion, they’re all lacking enough representation in the popular consciousness. In his podcast Mobituaries, Rocca celebrates the unusual lives and important contributions of lesser-known American heroes and forgotten historical events.

The former correspondent for The Daily Show, author, and actor has turned his lifelong interest in obituaries into an illuminating podcast that introduces us to some of the more obscure parts of American history. Using the obituary as a jumping-off point, Rocca gives us insightful profiles of historical figures, events, and even inanimate objects that fascinate him. From esoteric cultural heroes (Lawrence Welk) to entire species (the Neanderthal) and inanimate objects (the station wagon), Mobituaries paints expansive, compassionate portraits of interesting people and things.

With humor and depth, each episode delves into a lesser-known but nevertheless important bit of American history or revisits a famous figure from a new perspective. You’ll learn about forgotten experiments like the Orphan Train, an effort organized by Christian charity groups in the late 19th century to find new homes for poor and abandoned children from large East Coast cities. For over 70 years, these groups shuttled almost a quarter million orphaned children from dirty, overcrowded urban areas to adoptive families around the country — with mixed results. Through archival audio and an interview with one of the last Orphan Train adoptees, Rocca helps us understand this frequently erased moment in history.

One particularly touching episode tells the story of Chang and Eng Bunker, the brothers known as “the original Siamese twins.” Their strange and colorful life took them from Thailand to America, where they became star entertainers in 19th century traveling shows. Mobituaries recounts their awe-inspiring, complicated, and sometimes tragic lives through interviews with descendants and local experts. The brothers married, had over twenty children between them, and amassed a sizable fortune in the antebellum south—one which included slaves. Today, many of their 1,500 descendants continue to have annual reunions and remember the indomitable spirit of their ancestors. In 2018, a group of Bunkers traveled to Samut Songkhram, the twins’ birthplace, to witness the unveiling of a statue honoring the brothers.

The podcast also explores lighter subjects and welcomes engaging and delightful guest stars. If you too have wondered whatever happened to that other Cunningham kid, Henry Winkler will give you his best guesses in the episode all about sitcom deaths and disappearances.

You’ll find yourself fascinated by people or events you’ve never thought about before — and that’s the beauty of this show. You’ll also hear new takes on iconic figures and events you think you already know. In the Audrey Hepburn episode, Rocca wonders why Audrey’s image has become more ubiquitous than that of her arguably more successful counterparts. While it sometimes skews to being entertaining over informative (Rocca is, after all, a seasoned humor writer), Mobituaries walks a delicate line between somber, sometimes tragic episodes and light-hearted romps through some of America’s most absurd moments.

If you’re a fan of quirky American stories and hidden histories, this empathetic and well-researched show is a delightful exploration of compelling personalities, quirky cultural objects, and forgotten people and events. The show’s loose premise allows for an eclectic collection of subjects representing a wealth of awe-inspiring, touching, and funny experiences. The podcast calls on listeners to examine the lives of people and things past to understand their effects on the present and invites you to witness the surprising triumphs of heroes erased by history.