In Japan, Even the Dead Have a Housing Crisis 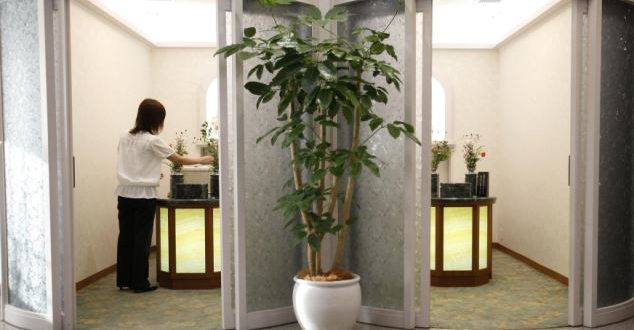 In Japan, Even the Dead Have a Housing Crisis

Urbanization, population growth, and the frenetic pace of modern life have undeniable impacts on all aspects of society, and funeral customs are not immune to these changes. In Japan, where a fifth of the population is over 70 and the death rate is climbing by 20,000 each year, creative solutions like “corpse hotels” seek to reduce the pressures that threaten to overwhelm existing mortuaries and accommodate traditional mourning in modern settings.

Room with a viewing

One such innovation seeks to alleviate some of the pressures caused by the constraints of urban real estate and growing death rates, which have created long wait times at urban crematories. Although the death rate will continue to rise for several decades as the post-war boomer population ages, construction of new mortuaries hasn’t kept up with demand.

This means that families who traditionally take the deceased home for a night before cremation must now wait several days for an available appointment at the mortuary, often in a city far from their own homes. In metropolises like Tokyo and Yokohama, wait times can stretch up to a week, with families forced to find lodging in some of the world’s most expensive cities.

To serve this population of itinerant mourners, a new kind of hotel has started popping up. Known as “itai hoteru,” these establishments fill the need of these “funeral refugees” for short-term lodging for both the dead and their mourners. The hotels are equipped with temperature-controlled rooms for bodies, altars, and, in some cases, adjacent rooms for family members. Unlike traditional morgues, which use refrigerated compartments and have strict visiting hours, the itai hoteru, or “corpse hotels,” offer a more dignified and flexible way for family members to visit, mourn, and wait out the extended mortuary queues.

Despite their ordinary exterior appearance, not all communities have welcomed these new neighbors. Some people who live near them dislike having the hotels next door, citing discomfort and health concerns. However, the itai hoteru, like most mortuaries, pose no threat to the health or sanitation of the adjacent community.

Japan’s aging population has also led to a shortage of young adults in the workforce, including the historically slow-to-adapt funeral industry. High-tech innovations play a role here too: Lastel, one of the country’s most popular funerary hotels, offers an automated viewing service that uses a robotic retrieval system to give mourners 24/7 access and reduce pressure on staff.

Lastel also features an area appointed like a typical Japanese home, where the family can dine together accompanied by the body of their loved one, visible behind glass in an air-conditioned chamber.

Other innovations in the death care industry speak to the same pressures. Because urban gravesites can cost tens of thousands of dollars and travel to remote locations isn’t cheap either, the cost of visiting family graves at least once a year, as is customary, has become prohibitive. Many Japanese families now turn to high-tech vertical columbaria, the newest of these housing as many as 100,000 urns.

In lieu of buying expensive train tickets for an entire family to visit a gravesite in a rural cemetery, the bereaved can now make a much shorter, more affordable trip to a local columbarium and maintain their visiting traditions in an increasingly dispersed society.

As urbanization and new economic structures continue to reshape the way people live, travel, and interact, we will all have to find new ways to celebrate the important milestones of life and death. Real estate in our densely concentrated cities continues to grow in value, causing shortages even for the living, let alone the dead. Smaller, more dispersed families and the loosening of religious and social traditions mean that funerals, like other rituals, are streamlined and simplified.

With its high population of elderly, strong emphasis on tradition, and ultra-dense cities, Japan faces a more urgent need than most to make far-reaching adjustments in funeral infrastructure. Techy columbaria and corpse hotels are at the forefront of a growing trend towards efficiency and automation in an unlikely industry.