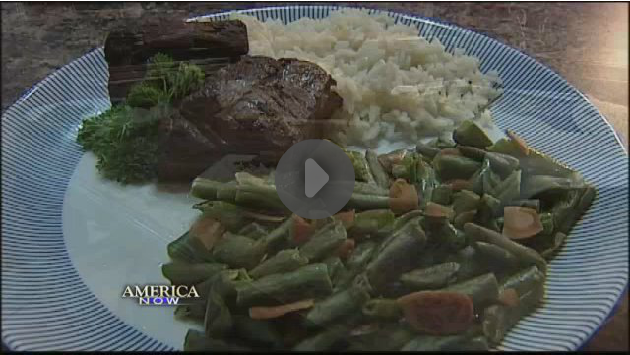 When someone dies, most people send flowers. A funeral director in Bowling Green, Ky. started a business to let you send something else: Comfort food. So why did a florist association write him a pointed note? We went to find out.

David Storke is the mayor of Bowling Green, a town small enough that you can drive a golf cart through it.

In this small town, Storke runs a funeral home, and now a small business he started called Sympathy Food.

Said Storke, “It’s what you do when your neighbor dies, you take them food. But if your college roommate’s mom dies in California, you can’t take them food.”

Instead, you can send them a meal from SympathyFood.com. Options include “ham, roast turkey, lasagna, all the side dishes you think of, the casseroles you make, desserts.”

“You just take them and put them in boiling water for 10 to 20 minutes depending on the type of food and its ready to serve,” Storke said.

Something interesting happened a little earlier this year. You see the company’s tag line is “A comforting alternative to flowers.” The Society of American Florists sent Storke an email, asking him to stop disparaging flowers.

The Society of American Florists’ website shows a list many companies it’s contacted about ads they say are negative against flowers. We asked the SAF why they do this and they sent us the following statement:

“The Society of American Florists believes products should be promoted on their own merits – without references to other products. Because flowers are repeatedly and unnecessarily compared to other products, we contact companies on behalf of our members and ask them to reconsider their approach. We have had companies tell us that they didn’t realize their promotions concerned local businesses, thanked us for letting them know, and will take our letter into consideration when developing future messages. Some companies have changed their advertising as a result.

In the case of Sympathy Foods, we realize it is not a blatant disparagement, as some that we have seen, but wanted to send a friendly letter to bring the concerns of some of our members to their attention.”

According to the SAF website, some companies have responded that the SAF is taking it too seriously. Other companies say they’ll change their ads. But Storke doesn’t plan to.

“I never thought it was really negative,” he said. “It was just a comforting alternative. Flowers will never go away and they shouldn’t go away.”

Instead, Storke plans to keep growing his small business, in a funeral home, where he says flowers will always be welcome.