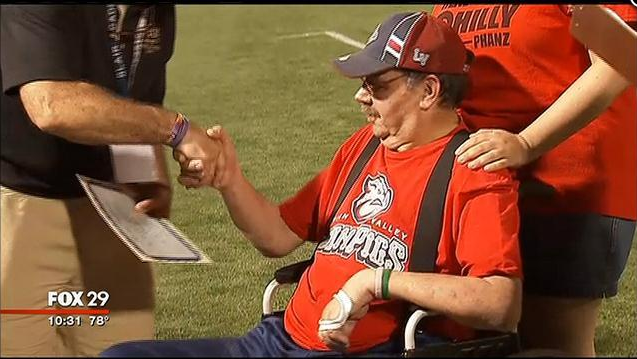 Minor league baseball is long known for its offbeat and wacky promotions. But what the Triple-A Lehigh Valley Iron Pigs did Tuesday night, some say is over the top.

“I’m stunned…because I can’t believe they would do something like that at a baseball game!!” says a fan.

One of the team’s lucky fans, if you can call them lucky, was going to walk away with a funeral. You read right, a funeral: casket, flowers, headstone and all, courtesy of local businesses.

“I was really hesitant initially. This is too crazy,” says Kevin Reichel of the Reichel Funeral Home.

Even funeral director Reichel thought a funeral promotion at a baseball game was a little strange. But he says it actually makes perfect sense.

“A baseball game is a family setting and I think if you are going to talk about your funeral or anything important in life, the first people you turn to are family,” says Reichel.

More than 50 fans submitted essays, hoping to be selected.

And right there in the middle of the 6th inning, Steve Paul of Freemansburg was announced the winner. The 64-year-old was diagnosed with Lou Gehrig’s disease in June. Three weeks later, through tears, he wrote his essay asking for a funeral.

“It’s one less thing that I have to worry about with my family,” says Paul

It may sound morbid. But to Paul, a lifelong baseball fan, the gift is a huge burden lifted for his family.

“It actually makes me laugh. He’s the only person in the world that I know that would be diagnosed with a disease that is named after a baseball player and then wins his funeral through a baseball team,” says Robyn Paul, his daughter.

And if you think Steve was sad, he wasn’t, especially seeing the standing ovation he got from fellow fans.

“Hopefully I won’t have to use this gift for a number of years. But I know, whenever it happens, it will be too soon for me,” says Paul.