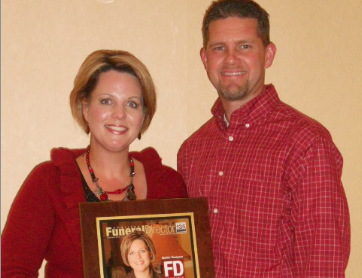 Thompson is a fourth-generation funeral director and is one of the owners of Brandon G. Thompson Funeral Homes in Louisiana. Thompson was the choice for this year’s Funeral Director of the Year award because of her utmost dedication to her family and profession, her advanced involvement within her community and her desire to help as many families as she can.

Thompson said it was a shock to win, but she was thrilled to be the holder of such a prestigious honor. “My staff was thrilled for me, too,” she said. For Thompson, funeral service is an important way to cope with a death and provide a meaningful way to honor the deceased.

“When people have lost someone, they’re often overwhelmed and fatigued, and I want to make things better for them. I can’t take away their pain, but I can ease their anxiety, by taking care of the details of the service, so they can focus on saying goodbye to their loved one,” Thompson said. “Many people think that funeral service is about death, but it’s not – not for me, anyway. It’s about life – respecting life, honoring life and celebrating life.”

Thompson was presented with an awards plaque during the Seventh Annual Funeral Service Business Plan, held Nov. 8-9 in Charleston, S.C. “We are honored to present Mrs. Thompson with our Funeral Director of the Year award,” said Thomas A. Parmalee, executive director of Kates-Boylston Publications, the company that publishes American Funeral Director, which is a nationwide magazine that has been helping funeral professionals succeed and serve since 1877. “Her dedication to her community, her profession and her family truly encompassed what being Funeral Director of the Year is all about.”

Judging criteria for this award included:

• Rodney Wakeman, vice president and co-owner of Wakeman Funeral Home in Saginaw, Mich. Wakeman, who was introduced to funeral service at an early age, has made technology a huge focus for himself and for his funeral home.

• Sherry Williams, manager and funeral director of Calumet Park and Funeral Chapel in Merrillville, Ind. Williams, a first-generation funeral director, has made her community a focus, organizing such events as the Angel Tree Ceremony and a fall festival.

• John “Jack” Martin, president and owner of Dusckas-Martin Funeral Home and Crematory in Erie, Pa. Although Martin was a late funeral service bloomer and received his mortuary school degree and license later in life, he has dedicated all of his time (and most of his free time) to helping his funeral home better serve his community.

• John T. McQueen, owner of Anderson-McQueen Funeral Homes and Cremation Tribute Center in Florida. McQueen’s commitment to family – both his own and those he serves – as well as his extensive community service, has made him a well-known figure in the funeral profession.

A series of articles on the runners-up was published in the November issue of American Funeral Director, and the winner was announced in the December issue. To subscribe to the magazine, visit www.katesboylston.com.

American Funeral Director is published by Kates-Boylston Publications, which is also the publisher of American Cemetery magazine and Funeral Service Insider. The company has been helping funeral professionals succeed and serve since 1877. Learn more at www.katesboylston.com.