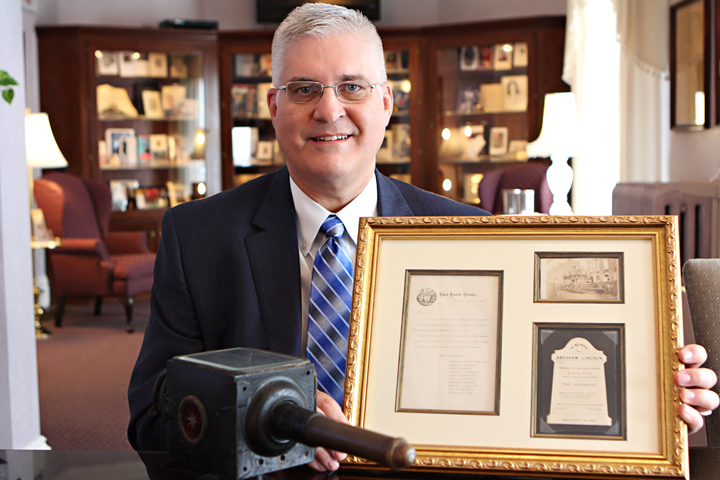 Ohio, it’s been nicknamed the “Mother of Presidents” and the “Buckeye State” on account of the many buckeye trees that once covered its hills and plains. It’s the home to the Rock and Roll Hall of Fame and Museum, the Pro Football Hall of Fame and the William McKinley Presidential Library & Museum. But 80 miles south of Cleveland, near Ohio’s Amish Country of Tuscarawas County rests a small city known as Dover.

For years, the city has been recognized as a popular tourist destination. With nearly 20 museums and over 300 events and festivals, Dover is filled with a celebration of their own rich history − from the Dennison Railroad Depot Museum to the Auman Museum of Radio and Television. However, there is one tourist destination which will elicit more stares then that of the flickering of a television screen, called the Famous Endings Museum, home to the world’s largest, privately owned collection of funeral-related memorabilia of the famous.

It’s been featured on Ripley’s Believe It or Not in 2005, written about in numerous tourism websites, brochures and books, including Ohio Oddities: A Guide to the Curious Attractions of the Buckeye State by Neil Zurcher, and contains over 1500 original pieces of funeral memorabilia from memorial programs, prayer cards, photos from famous funerals, memorial folders, documents and handwritten instructions for funeral arrangements, newspaper clippings of some of the worlds most recognized and famous individuals. The museum also contains audio recordings relating to the deaths of US Presidents Lincoln, Kennedy, Nixon and Reagan, as well as a mourning ribbon from Lincoln’s funeral in 1865 and a lantern from the horse-drawn carriage that carried Lincoln’s body in procession through the capital of Albany.

For nearly 20 years, the Famous Endings Museum has only grown in both items and popularity and has become synonymous with the city’s funeral home Toland-Herzig Funeral Homes & Crematory since, owner and president John Herzig got his first autographed photo in 1996 that would become the catalyst for the touristed museum.

It started innocently enough. Herzig, a third generation funeral director had been collecting autographs for some time. A hobby, which saw him purchasing autographed photos of celebrities and athletes. But what had started out as a minor hobby soon turned into something more when Herzig ordered an autographed photo of legendary boxer Joe Louis.

“When I got the package, the guy I was in contact with had also included Joe Louis’ funeral program,” said Herzig. “This was before he even knew I was a funeral director, but that’s how it all started.”

With the addition of Joe Louis’ funeral program, Herzig’s collection slowly grew. “I kept getting funeral-related items and then people encouraged me to display them. So I set up a display cabinet in the funeral home.”

People attending funerals would often stop and look at the contents in the display cabinet on their way to the washrooms. These people would return and inform others who would also leave to view the items. When they would return Herzig would find himself fielding questions, telling of the stories behind his collection. “Over the last 5-6 years, our funeral home has turned into a museum and we get visitors from all over the country, as well as other countries like Canada and even Russia.”

It wasn’t long until Herzig began getting visitors from Chicago, Philadelphia, New York and many other citoes. Some would arrive as part of a Mystery Tour – a tourist shuttle bus, which would bring groups to locations the tour guide hadn’t told them about.

When the visitors arrive, Herzig takes them on guided tours, telling groups the unique stories behind the collection and how each life was celebrated. Many of his stories are what Herzig calls “Joyce Stories”; stories of what his wife had to endure as he built his collection, like his spur of the moment trip to Michigan to visit Dr. Jack Kevorkian’s funeral.

“Dr. Jack Kevorkian died and I wanted to pick something up from the funeral to add to the collection,” Herzig said. “When Jack died, he didn’t have a wife or child so the funeral arrangements were left to his sister and niece.”

At first, for fear of protestors, Herzig learned that the funeral was going to be a private affair, but upon checking the internet the next morning, he discovered it had actually been made public. With opportunity available, Herzig pitched the idea of traveling to Michigan, where he and his wife attended the heavily documented doctor’s funeral.

With television crews and journalists filming and snapping pictures of the event, Herzig and Joyce waited in the viewing line to pay their respects to Kevorkian.

“I was disappointed that there was no program,” Herzig said. “But the next day, as I was looking online I came across an AP photo and who do I see?  Joyce and I standing by the casket of Jack Kevorkian.” That very image has been used by dozens of media outlets across the country, as far reaching as San Francisco to New York City.

While Herzig’s collection ranges from US Presidents, celebrities, athletes and musicians, his items also contain a collection of mementos from individuals who’ve helped shaped the world. Whether they were well known or not, Herzig displays them all. His collection has a little bit of everything, from souvenirs of Canadian Prime Minister Pierre Trudeau, to items belonging to Princess Diana, the Queen Mother and Winston Churchill.

“We have items from Wilson Greatbatch, the man who invented the cardiac pacemaker; Eugene Polley, inventor of the television remote control; Geraldine Doyle, the inspiration to Rosy the Riveter,” Herzig explained.

In fact, the way Herzig describes it, the Famous Endings Museum isn’t just about death. The topic may be death-related, but like a museum, Famous Endings is about preserving a collection of artifacts for their artistic, cultural and historical importance. His collection is built upon the history, the stories, the celebration of these lives that were lived. It’s the preservation of a memory of what each individual had to offer, whether it was laughter, music, entertainment, inspiration, life-saving medical technology, humanitarian efforts, or technological convenience – a feat that has, for the last decade, been finding its way in how funerals are celebrated today.

“Our whole premise is looking at death differently,” Herzig said. “Funeral homes are for people to pay tribute and honor those who have lived. For instance, in his book, The Last Lecture, Randy Pausch, a man who was a huge Disney fan wrote, you either live your life like an Eeyore or like a Tigger. After his death, during his funeral, everyone who attended received a Tigger doll.”

Herzig also notes how after Millard Fuller – founder and president of Habitat for Humanity International – died in 2009, attendees were given nail aprons. But it’s these little things – these defining artifacts that carry the memory of the loved one. As Herzig said, funerals and funeral homes are for people to pay tribute and honor those who made a difference, shaped various lives, whether directly or in directly, like Wilson Greatbatch or Samuel Morse (who’s Morse code and telegraph went on to improve tele-communications worldwide).

It’s this kind of understanding that has made Toland-Herzig Funeral Home stand-out. They’re ahead of the curve and understand that the industry is changing.

“Newspapers are becoming obsolete and it’s important to let people know what is going on,” Herzig explained. “As time goes on, it’s going to become more and more important to align yourself with an online presence, whether it’s Facebook, Twitter or your website.”

A fact Herzig has already embraced and done so successfully. Through their Facebook page, Herzig started something new to encourage discussions and get people talking about funerals, but in a different way – a positive way.

“Last year, I decided to do a daily quiz,” Herzig explained. “The night before I would post some clues to the Facebook page and the next day I would post the answer.”

Clues such as November 7th’s, which described an American movie actor nicknamed the King of Cool, who received an Academy Award nomination for his role in The Sand Pebbles, and whose other popular films included, The Great Escape, The Thomas Crown Affair, Bullitt, Papillon and The Towering Inferno, among other hints.

If you had guessed, Steve McQueen, the way eleven others had, you would have been one of the lucky participants to the Facebook page.

“Funeral homes have a hard time with utilizing Facebook,” Herzig said. “There isn’t much content a funeral home can incorporate except for obituaries and general information… maybe include a little biography of the company, contact information.”

But that’s not all that the Famous Endings Museum has to offer. Herzig also occasionally hosts An Evening to Remember, which is a presentation that focuses on five or six of the celebrities represented in the museum, which is often attended by over 100 people, who also receive a tour of the collection.

And while Herzig’s collection is large – almost too large to select one specific item which is a personal favorite, he has pointed out that one item in general, which they are excited about is an accordion they have in their possession.

“Though it isn’t 100% authenticated,” Herzig said. “We have been approached by the Roosevelt Presidential Library and Museum, which believes it could be the very same accordion Graham W. Jackson played as Roosevelt’s funeral train carried him off. Graham Jackson’s picture was used inLife magazine and it’s very possible the accordion he has is the one we have in our collection.”

Among other items in the Famous Endings Museum are inscribed flashlights handed out during actor James Doohan’s funeral (famed for his role as Scotty on Star Trek), a cookie with the caricature of comedian and actor Rodney Dangerfield, a shell from President John F. Kennedy’s salute at Arlington National Cemetery, and many others.

Throughout the week, the museum is opened Monday through Friday from 9 a.m. to 5 p.m. with free admission. While Herzig balances the operation between funeral services, he is in the process of working with a museum specialist in expanding a separate section for the museum to operate on its own.